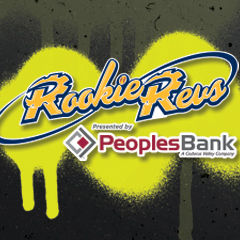 By joining the Rookie Revs Club presented by PeoplesBank, you're not only showing your support for the York Revolution, you're joining the best kids club in the Atlantic League!

Here's what you can expect this season:

- Six Flex Field Box Tickets
- Meet & Greet with the Team! (May 22)
- Behind the Scenes Tour (July 23)
- Invitation to DownTown's birthday party with a free piece of birthday cake! (August 6)
- $15 off a Revolution Birthday Party!
- PeopleBank Rookie Rev PopIt!
- Free entry to the Penn State Children's Hospital Playground all season
- 10% off at the First Capital Federal Credit Union Team Store with your membership card

Packages will be mailed shortly after purchased.
If you'd prefer curbside pick up, email tickets@yorkrevolution.com to schedule a time to pick up your Rookie Revs package at the ballpark.